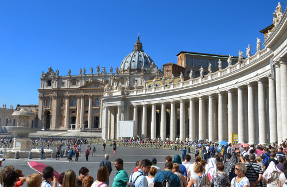 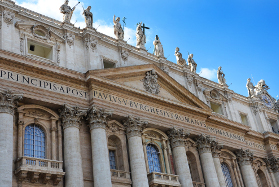 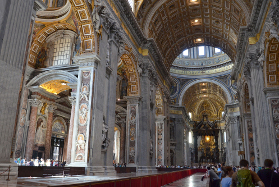 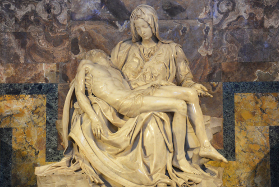 The history of the St. Peter's Basilica begins in the 4th century when the Emperor Constantine decides to build a basilica where the apostle had been buried. In 329 the construction of the basilica was completed. The church was used for the celebration of the cult, as a covered cemetery and as a funeral banquet room. During the High Middle Ages it was the main pilgrimage site in the West. The archaeological excavations carried out under the present basilica, the descriptions, drawings and ancient paintings give us an idea of what the first Vatican basilica was like.

In 1506 Julius II begins the construction of a new basilica replacing the existing one, commissioning to the architect Donato Bramante. Bramante proposes a plant in Greek cross (four equal arms), like the Byzantine churches of 9th century. When Bramante passed away in 1514, the works passed to Rafael Sanzio and several proposals were discussed until 1521. Rafael died in 1520 and construction continues with Antonio da Sangallo the Younger, who in 1538 concretizes his project for the basilica.

In 1546, at the death of Antonio da Sangallo, the architect named was Michelangelo Buonarroti who will give the definitive shape to the design, simplifying the plant by eliminating the sacristies with towers of the corners of the square designed by Bramante; this transformed the outer limits of the area into a continuous surrounding wall giving unity and coherence to the volume of the building. Michelangelo reinforced the structure since the axis of his idea was the erection of an imposing canted dome, on an important drum, that would raise much more than the original proposal of Bramante.

Its construction was completed twenty-four years after his death by Domingo Fontana and Jacobo della Porta. The latter was in charge of concluding the project of Michelangelo and when dying in 1602 was only to erect the facade and design the square. Pope Paul V decided to extend the church to the front with the architect Carlo Maderno, transforming the plant of Greek cross by Bramante in a plant in Latin cross, traditional of the churches of the West.

Maderno prolongs the vault of the front arm placing on both sides a series of chapels covered with oval domes and in the exterior continues the wall designed by Michelangelo highlighting the front with great attached columns. The front was built between 1607 and 1612. In 1624, Juan Lorenzo Bernini, is called to realize the canopy that constitutes the major altar and that by tradition should be located in the center of the cross, on the tomb of the Apostle Peter, completed task in 1633. Since the death of Maderno in 1629, Bernini takes charge of the interior decoration of the whole church giving it its present appearance.

What is the St. Peter's Basilica today?

The St. Peter's Basilica is one of the largest buildings in the world and is the largest of the papal basilicas. At the moment the St. Peter's Basilica is a building that measures 218 meters of length and 136 meters of height including its dome. It has an area of 23,000 square meters. This basilica has been considered as an architectural work of great importance by the magnitude of its facade and by the quality of its work, annually receives people of diverse countries of the world who come to its interior to admire the best sculptures of the times and appreciate a work that has had centuries of construction.

Curiosities of the St. Peter's Basilica

Did you know that a million cubic meters of soil had to be removed to complete the excavation necessary for the construction of St. Peter's Basilica? The construction of the present St. Peter's Basilica was commissioned by Pope Julius II (1503-1513), but before that, there was another basilica built by Constantine in 319. At that time the newly converted emperor put an end to the persecution of the Christians and ordered the construction of a basilica that would bear the name of the first pope. The ideal place for this construction was the great circus of Nero but Constantine ordered that the basilica was constructed in the place where Saint Peter had been buried.

Did you know that Michelangelo was only 24 years old when he sculpted The Pity (La Pietá) that is inside the St. Peter's Basilica? This work is worth to be seen closely to be able to appreciate the genius of this artist with his young age. In 1972 The Pity suffered attacks and since then is protected by a crystal.

Did you know that Michelangelo was the one who designed the current uniforms of the Swiss Guard that protects the St. Peter's Basilica?

St. Peter's Basilica is located in Vatican City, and is the universal headquarters of the Catholic Church as well as the Pope's residence. The present Basilica, built on the Constantinian Basilica, is the expression of the will of the Popes of the Renaissance who, relying on great artists such as Bramante, Michelangelo, Bernini and Maderno take us on a journey through art, faith and spirituality where we can not only admire the magnificence of the building, but also walk through its corridors, visit the chapels and enjoy the beauty of numerous works of art, such as Michelangelo's Pity (La Pietá). At the moment it is possible to visit the tombs of the Popes located in the grottos of the Vatican, and it is possible to see the tomb of Saint Peter and its successors.

How to visit St. Peter's Basilica?

The entrance to the St. Peter's Basilica is free, but given the large number of visitors, it is advisable to book a guided tour to avoid the line. The options to visit are several: it is possible to book a group guided tour or a visit with an audio guide, it is also possible to combine the group visit of the Basilica to the tour of Vatican Museums and the Sistine Chapel or visit the Vatican Mosaic Studio. You can also book a private guide to visit it and combine this visit with other attractions. Finally, if you want to fully enjoy St. Peter's Square, you can visit it accompanied by a private guide who can also combine this visit with the Castel Sant'Angelo, which is not far away.

Within walking distance of St. Peter's Basilica are the Vatican Museums, one of Rome's main tourist attractions. Inside are thousands of works of art collected over the years by the Catholic Church for more than five centuries.

Leaving behind the Basilica of St. Peter and walking along the Conciliation Avenue (Via della Conciliazione), we find the Castel Sant'Angelo built during the time of the Emperor Hadrian as his personal mausoleum and of his family. Later, this building became a military building and was integrated into the Aurelian Wall in 403. From the 11th century the fort became property of the popes as it connected with the Vatican City by a fortified corridor called Passetto. A visit you can´t miss!

The entrance to the St. Peters Basilica is free. You can avoid the long queue by booking a group tour or a private tour.

For religious reasons on Wednesday, on Sunday and on festivities the entrance is allowed after 1.00 pm

Closed on January 1st and 6th. 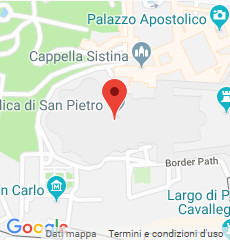