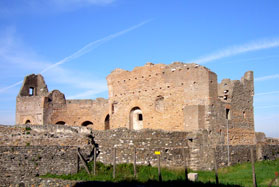 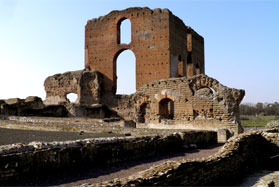 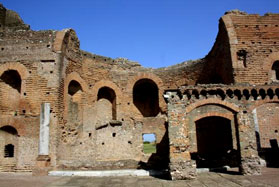 A bit of history about the Villa of the Quintili

The Villa of Quintili was the largest and most sumptuous residence of the Romans. The original nucleus belonged to the Quintili brothers, the two consuls in the year 151 AD, and was expanded when the villa became imperial property under Emperor Commodus who loved to live here for the tranquility of the countryside and the thermal baths. The villa extended between Via Appia Antica and Via Appia Nuova and built around a large square. The most impressive part of the construction consists of the main rooms and those of the servants, a circular building, with a series of rooms and the two large thermal rooms of the caldarium and the frigidarium with large windows fourteen meters high and polychrome marble. The monumental complex overlooks the Roman countryside and offers a panorama that has inspired many famous artists over time.

What is the Villa dei Quintili nowadays?

The Villa dei Quintili became state-owned only in 1986. Today this archaeological site is a "house-museum" with marble friezes and sculptures that adorned the villa in the past. The monumental complex of the villa is located in the Roman countryside and offers a unique panorama that over time has inspired many famous artists.

Curiosities about the Villa dei Quintili?

Did you know that thanks to some pipes of lead found in the 19th century, it has been possible to attribute to the Quintili brothers the property of this Villa? In these pipes, the names of these Roman consuls are written.

Did you know that Emperor Commodus had the two brothers Sesto Quintilio Condiano and Sesto Quintilio Valerio Massimo murdered in 182 AD to take possession of their property, including the town that remained an imperial property until the end of the 3rd century?

Why visit the Villa dei Quintili?

Just outside the city, between Via Appia Antica and Via Appia Nuova, lies the Villa dei Quintili which offers its visitors the possibility of an outdoor walk through the remains of this magnificent Roman villa. In the area surrounding the Villa have been found finds of great historical value, the same building that was originally built around a large square, is one of the jewels of Via Appia

During your visit to Rome, you can not miss the main attractions of the eternal city, this open-air museum offers you a huge amount of attractions in one city. Since it is impossible to see all in a short time, we suggest some that you definitely can not miss.

We suggest you visit the squares of Rome. Visit Piazza di Spagna with its staircase and walk towards the Trevi Fountain, throw a coin to follow the tradition and, if you believe in the legend, return to Rome. After a 5-minute walk, you will reach the Pantheon, the best-preserved building in the Roman Empire. Continue to Piazza Navona and admire its three fountains and certainly not miss Campo dei Fiori, one of the liveliest squares in the city.

After walking through the city squares, visit some of Rome's most important monuments and museums. Start with Imperial Rome and visit the Roman Forum, the Palatine and the Roman Colosseum with a single ticket that you can buy online avoiding the long lines. Nearby are also the Baths of Caracalla which are worth a visit. One museum you absolutely must visit is the Borghese Gallery, one of the world's most famous art museums with works by Titian, Raphael, Caravaggio, Rubens, and Botticelli. Finally, don't miss the Vatican Museums, one of Rome's main attractions, where you can admire the Sistine Chapel, Michelangelo's masterpiece. On leaving the museums, visit St. Peter's Square, one of the largest and most beautiful squares in the world at the foot of St. Peter's Basilica.

The Villa of the Quintili is open from 9.00 am to one hour before sunset, depending on the season:

The Ticket office closes one hour before closing time.

Villa of the Quintili: Via Appia Nuova, 1092 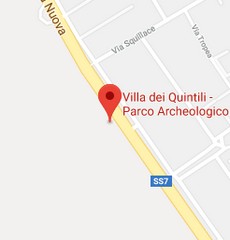