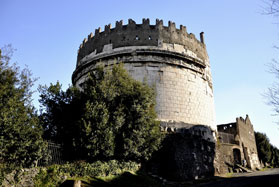 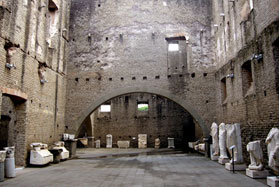 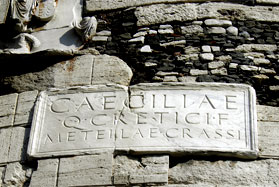 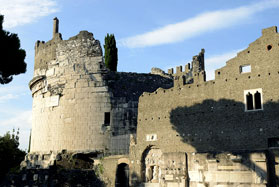 A bit of history about the Tomb of Cecilia Metella

This monument was built during the reign of Emperor Augustus in honor of Cecilia Metella, the daughter of a Roman Consul. It is a circular mausoleum raised in a square base, very similar to the one of Augustus himself, only smaller and decorated at the top by a marble frieze with festoons and ox heads. The presence of these reliefs takes the name of "Capo di Bove" with which the area was known in the Middle Ages. At the entrance, there is an inscription with the name of Cecilia Metella, the owner of the tomb.

This ancient Roman burial place belonged to the nobility and was linked to two important Roman families of the Republican era, by marriage and birth, who held important public positions such as his father, Quintus Caecilius Metella and her husband, Marcus Crassus, son of Crassus. The mausoleum can be dated to the end of the 1st century BC, although it is probable that it was used at least until the 2nd century AD.

In 1303 it was incorporated into the Castrum Caetani and became the principal tower of the fortification. The noble palace of Castrum still retains characteristics of a medieval residence as a sign of the power of the family of Pope Boniface VIII. The tomb and the castle are an interesting example of the materials and construction techniques adopted in antiquity and in the Middle Ages and nowadays it is possible to visit the hypogeum plan.

What is the Tomb of Cecilia Metella nowadays?

Walking along the traditional Via Apia of the city of Rome, we find the Tomb of Cecilia Metella exactly in the place where the rebellion of Spartacus died. This is an impressive monument very characteristic of this street, was built in honor of Cecilia Metella, daughter of the consul Quintus Cecilio Metello that conquered Crete defeating the pirates of the Mediterranean.

Curiosities about the Tomb of Cecilia Metella

Did you know that the tomb of Cecilia Metella has a circular shape with a diameter of 29.5 meters and 11 meters in height? It is also located on the route that connected Rome with Naples and was built between 312 and 310 BC under the command of Appius Claudius the Censor.

Did you know that in the 9th century this ancient monument was the property of the Church? In spite of this, it soon became the goal of many Roman families for its exceptional strategic position.

Why visit the Tomb of Cecilia Metella?

Because this mausoleum was of greater importance during the middle age when Pope Bonifacio VIII donated it to its own family, the Caetano family who used the construction including it in its castle-like tower of defense and to control the pass of the merchants and consequently charge them taxes.

From the Tomb of Cecilia Metella it is possible to start a walk along the Via Appia Antica, where it is possible to find many famous monuments, such as the catacombs of San Sebastiano and San Calisto, and a little further on the Thermal Baths of Caracalla. From here, by metro, you can reach the Colosseum and visit the most famous amphitheater of Ancient Rome. With the entrance to the Colosseum, you can also visit the Palatine Hill and the Roman Forum thanks to the combined ticket valid for two days.

Discovering all the beauties of the Eternal City would take a lifetime, but on your itinerary you should not miss the Classical Rome, which includes Piazza Navona, one of Rome's most beautiful squares with its fountains, the Trevi Fountain in rococo style, which work began in 1732 by Nicola Salvi and completed by Giuseppe Pannini in 1762, and the Pantheon dedicated to the worship of all gods. Also visit the treasures of Vatican City, St. Peter's Basilica, Vatican Museums, Vatican Gardens and the magnificent Sistine Chapel for a memorable journey.

The Tomb of Cecilia Metella is open from 9.00 am to one hour before sunset, depending on the season

The Ticket office closes one hour before closing time. 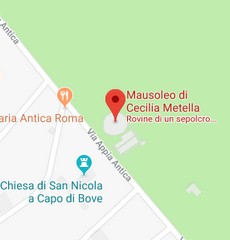