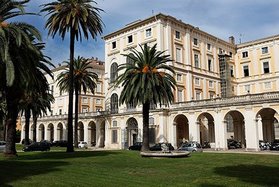 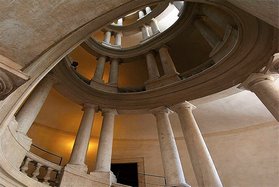 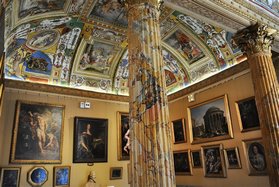 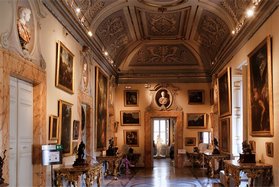 A little history of Palazzo Barberini

The history of the Palazzo as a national museum began in 1953 when Palazzo Barberini became the headquarters of the National Gallery of Ancient Art together with Palazzo Corsini, which was already a national museum in 1895. Over the years, the collection of Palazzo Corsini has increased thanks to acquisitions and donations such as the Torlonia and Monte di Pietà collection in 1892, the contribution of Henriette Hertz in 1915 and the purchase of the Chigi collection in 1918. The expansion of the collections made it essential to acquire new exhibition spaces, and this was done in the areas of Palazzo Barberini.
Unlike the Corsini Gallery, there are few remains of the original Barberini family collection. Therefore, while Palazzo Corsini's headquarters contains a gallery of historical images of its own, Palazzo Barberini presents a chronological and representative configuration of the leading schools of painting from the 13th to the 18th century, organized in such a way as to be able to integrate new acquisitions into the collection.
The 16th and 17th centuries are the most represented centuries with works by Raffaello, Piero di Cosimo, Bronzino, Hans Holbein, Lorenzo Lotto, Tintoretto, up to Caravaggio and his "Caravaggeschi" followers and the prosperous 17th century with works by Gian Lorenzo Bernini, Guido Reni, Guercino, Nicolas Poussin, Pietro da Cortona. On the other hand, the 18th-century collection preserves important works by Maratti, Batoni, Canaletto, Subleyras, Mengs and Van Wittel; as well as the paintings donated by the Duke of Cervinara, with the refined paintings by Fragonard and Boucher, and those of the Lemme donation, with the rare sketches by Corvi and Ghezzi.

What is the Palazzo Barberini today?

The answer to this question is simple because it is a museum with two galleries! The National Galleries of Ancient Art are located in Rome and are divided into two different venues, one in Palazzo Barberini and the other in Palazzo Corsini. The Barberini Palace was designed for Pope Urban VIII by Carlo Maderno on the site where Villa Sforza previously stood. Palazzo Corsini, formerly known as Palazzo Riario, is a 15th-century construction and was restored in the 18th-century by the architect Ferdinando Fuga for Cardinal Neri Maria Corsini.
The gallery's collection currently includes works by Bernini, Caravaggio, van Dyck, Holbein, Beato Angelico, Lippi, Lotto, Preti, Poussin, El Greco, Raffaello, Tiepolo, Tintoretto, Rubens, Murillo, Ribera and Tiziano.

The collections of the Corsini Gallery began in the 17th-century with Cardinal Neri Corsini, who brought together works belonging to the family, works acquired directly by Pope Clement XII when he was still a cardinal in addition to the numerous gifts received by the family. This impressive gallery houses 14th-18th century paintings, with a prevalence of 16th-century authors, ancient and modern sculptures, bronze statues, and 18th-century furniture. The Roman, Neapolitan, and Bolognese schools of the 17th century are also represented here, with essential groups of Bamboccianti and landscape architects. Inside, you can admire works by Beato Angelico, Caravaggio, Rubens, Murillo, Luca Giordano, among many others.
The Corsini Gallery is the only gallery of Roman images belonging to the 18th-century, and that has survived intact and is the central nucleus of the National Gallery of Ancient Art in Rome.

Curiosities about the Palazzo Barberini

Did you know that Palazzo Barberini, the urban villa, was bought by the most prestigious exponent of that family, Maffeo Barberini, who made history for having been elected Pope in 1623 under the name of Urban VIII? The pontiff is not only remembered for the Jubilee XIII, the practice of nepotism, or the condemnation of Galileo Galilei but also because he initiated the baroque.
This capricious and imaginative taste went beyond the Italian borders that prevailed throughout Europe.

Why visit the Palazzo Barberini and the Corsini Gallery?

Palazzo Barberini presents a unique baroque palace with the treasures of the National Gallery of Ancient Art in its 34 rooms. It has a permanent collection of around 500 works, where masterpieces of Italian and foreign painting are exhibited, including works by Raffaello and Caravaggio, and several works from the 18th-century.
On your tour of the Barberini Palace, you will be able to admire the magnificent hall of columns where the great fountain of Bacchus is located and whose naturalistic decorations seem to reflect the adjacent gardens.

How can I visit Palazzo Barberini and the Corsini Gallery?

The reservation of tickets for this museum can be made comfortably online.

In Rome, the eternal city, the Roman Colosseum, the Trevi Fountain, Piazza Spagna, Piazza Navona, Agrippa's Pantheon, the Borghese Gallery, the Vatican Museums are some of the fascinating monuments you can discover in Rome. However, there are many other very interesting attractions that the Italian capital has to offer. These are just a few examples: The Ara Pacis, a memorial created between the years 13 and 9 BC as a celebration of peace in the Mediterranean. Trajan's Market, built between 100 and 110 as the first covered shopping center in history. The Mouth of Truth, a colossal marble mask that is said to have bitten the hand of the liar. The Capitoline Museums located in two palaces in Piazza del Campidoglio are the main municipal museums in Rome. Palazzo Venezia, a Renaissance building where artistic works are exhibited from the beginning of the Christian era to the beginning of the Renaissance. The Spada Gallery, with a false perspective, made by Borromini.
All of this and much more!

Closed on: Monday, January 1 and December 25 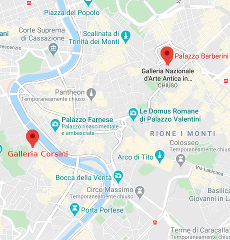