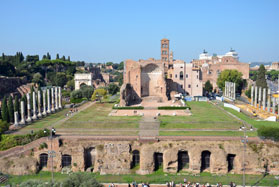 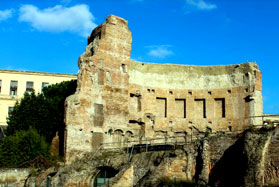 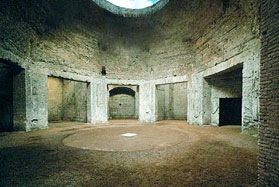 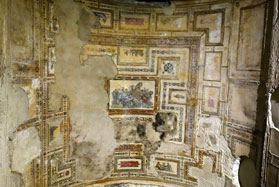 A little history of the Domus Aurea

After the Great Fire of Rome in 64 AD, Emperor Nero ordered the reconstruction of his residence, the Domus Transitoria in the Palatine. Nero made the most ostentatious palace ever built that no king, consul, or emperor of Rome would ever have thought of.

The Domus Aurea was part of the project that Nero had devised to convert and transform Rome into a new city "Neropolis" following the Hellenistic model in the manner of Alexandria, this is, a city with orthogonal plane with squares and wide rectilinear streets. With this same ideology, 60 years later, Emperor Hadrian built the gigantic Villa Tiburtina 30 km from Rome.

What is the Domus Aurea nowadays?

The Golden House reopened in 1999 after more than 20 years of restoration, however six years later it was closed due to detachments and security problems. Its doors were opened again to the tourist in February of 2007 restricting the number of visitors and requiring the use of a helmet. A few of the 150 rooms that were discovered were opened and the octagonal hall was not included.

On March 30, 2010, the return of the entrance of one of the galleries was added, extending the period of closure to the public of the archaeological site until 2015. The Domus Aurea of Nero has finally been opened to the public after a long period of restoration and is accessible only with the guided tour.

Curiosities of the Domus Aurea

Did you know that the Domus Aurea had 300 rooms? It is estimated that the Domus Aurea occupied about 50 hectares between the hills of the Palatine and the Esquiline with a total area of 25 times that of the Colosseum. It also had vineyards, corn fields and forests. Apparently this villa was used exclusively for parties, and none of its 300 rooms were used as a bedroom. However the strangest part is that no kitchen or latrine has yet been found throughout the complex.

Why visit the Domus Aurea?

The construction of the Domus Aurea also known as Golden House has been considered the most extravagant construction in the history of Rome.

Its huge golden dome thanks to which it received its name was one of the many extravagant elements of its decoration. This building had ceilings stocked with semi-precious stones and finished in ivory, precious mosaics, pools and fountains plus an artificial lake. Most of the walls were covered in frescoes, the rooms finished in white marble with shapes that played with light. The Domus Aurea also had pools and fountains that echoed the sound of water in the hallways.

How to visit the Domus Aurea?

The visit to the site is possible exclusively with the guided tour reservation of the Domus Aurea and the Raphael exhibition. An innovative visit that will allow you to discover the ancient residence of Nero in all the splendour of the past, thanks to a series of multimedia installations.

In Capitoline Hill, next to the Roman Forum, is the Monument of Vittorio Emanuele II. Come up to the viewpoint terrace, Terrace of the Quadrigas and enjoys the best panoramic views of Rome, in particular of the archaeological zone of the Ancient Rome.

You cant miss in your visit to Rome a walk by its squares, Spain Square that is very close to the shopping street of Via Condotti. Navona Square, a true monumental complex with its wonderful fountains like that of the Four Rivers of Bernini

Of course in your visit to the Eternal City you can not miss a visit to the Borghese Gallery an art museum that houses works by famous artists such as Titian, Raphael, Caravaggio, Rubens, Botticelli.

How to visit the Domus Aurea

It is possible to visit the Domus Aurea by booking a guided tour.

Guided Tours are organized on Friday, Saturday and Sunday in Italian and English. 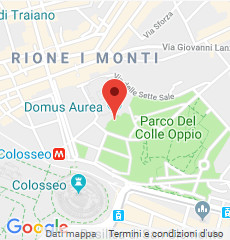