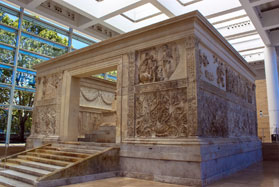 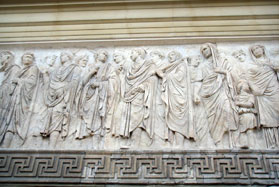 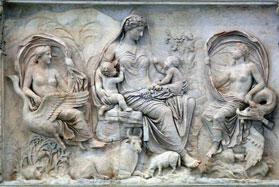 A bit of history about the Ara Pacis

The Roman Senate, in 13 BC, decided to build an altar in gratitude to Emperor Augustus. The Ara Pacis Augustae or Altar of Peace of Augustus, was inaugurated 4 years later, in the year 9 AC. A splendid monument dedicated to the peace and prosperity that the reign of Emperor Caesar Augustus had brought to Rome.

This monument made in marble, celebrates the peace in the Mediterranean area established by the emperor after his victorious campaigns in Hispania and Gaul. It was located in Campo Marzio, a large area outside the walls of the city that gave entrance to Rome from the north through the Via Flaminia, now Via del Corso. Here the legions practiced the rites of purification when they returned from a battle.

From the second century AD this monument fell into oblivion. It was covered by the mud that carried the Tiber River when it grew and the urban transformations determined its definitive loss. In the twentieth century, this historic monument was rescued from the foundations of a Renaissance building and was moved from Campo Marzio to the bank of the Tiber and placed in front of the mausoleum of Augustus which is the place where it is currently.

What is the Ara Pacis nowadays?

The Ara Pacis is one of the most significant monuments of Ancient Rome as a temple for the sacrifice of sacred animals where only priests and vestals participated.

This monument is an altar located inside a closed structure made in Carrara marble. Its impressive decoration consists of several reliefs showing the family of Augustus in procession, in addition we can appreciate different allegories related to the foundation of Rome.

In 1995 the modern building that houses the Ara Pacis was inaugurated, protecting this work from the dangers of humidity and pollution that have threatened it for decades.

Curiosities about the Ara Pacis

Did you know that Ara Pacis is a marble poem? This monument can only be compared to the greatest poem ever written in Latin: Virgil's Aeneid. An immortal song to the glory of the first emperor, Octavian Augustus, and to the future that his hand would have brought for the greatness of Rome.

Did you know that recently the monument was covered by a building of minimalist lines designed by Richard Meier, to protect it from air pollution? The new set includes underground rooms for temporary exhibitions.

Why visit the Ara Pacis?

This museum on the banks of the River Tiber has been designed for the Ara Pacis, a sacrificial altar dating back to the year 9 BC. Planned as part of an effort to protect the cultural legacy of Rome, the new structure replaces the former enclosure of the monument that was in a state of advanced decay.

The structure consists of a long glass lodge on a single raised floor on a shallow podium that provides a transparent barrier between the Tiber embankment and the existing circular perimeter of the Augustus mausoleum which was built in the year 28 BC.

Although the main objective of this construction is the protection of the old altar, the building offers space for temporary exhibitions and installations dedicated to archaeological subjects as well as a digital library of the avant-garde of the Augustinian culture.

This is the monument that we can include today in our visit to Rome, especially after the architectural intervention of Richard Meier that has provided an exceptional "container". It is located in the center of Rome, surrounded by other interesting monuments that tell us the history of a city.

The Pantheon, one of the best preserved works of ancient Rome was built in the time of Hadrian in the year 126 AD. Navona Square, with a very elegant baroque style is one of the most beautiful and popular squares of Rome, without a doubt, the main attraction of this square are its three fountains, Fontana dei Quattro Fiumi, Fontana del Moro and Fontana del Nettuno. 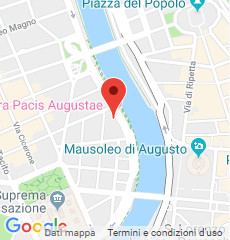