The ticket is valid for 1 day. 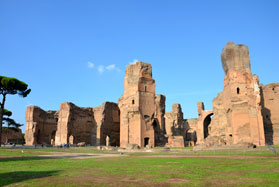 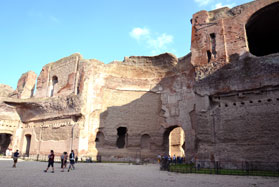 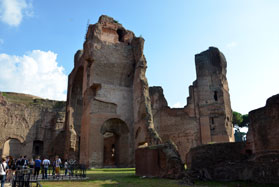 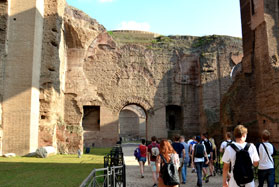 A bit of history about the Caracalla Thermal Baths

The Baths of Caracalla were built around the year 216 for the use and enjoyment of the Romans. These thermal baths were inaugurated with the name of Baths Antoninas and are one of the largest and best-preserved examples of ancient thermal baths. They were built by Emperor Caracalla and show the typical rectangular shape of the Imperial spas. This complex was not only a place to bathe, practice sports and take care of one's health but also a place of study and rest. On both sides of the central body, there are a number of environments that form part of the thermal station, the "Caldarium", the "Tepidarium", the "Frigidarium" and the "Natatio".

The Baths of Caracalla are one of the few cases where it has been possible to reconstruct, in part, the original decorative program. The written testimonies that have been found tell us about the huge columns and marble pavements with oriental colors, mosaics of glass paste and marble on the walls, painted stuccos and areas decorated with hundreds of statues and colossal groups, either in the niches of the walls of the different environments more important than in the gardens. For the water supply, a special Acqua Antoniana branch of the Acqua Marcia main aqueduct was created, the thermal baths were restored several times and ceased to function in 537 AD.

What are the Caracalla Thermal Baths nowadays?

Currently, in the thermal baths of Caracalla, we can see other areas that are around the two gyms. Even though there are only brick walls and large tumbled vaults, the remains still remain, which centuries ago gave the splendor to these Baths. In spite of the pass of time and the looting still, the floor of the building remains and a good part of the walls that formed the enclosure.

Curiosities about the Caracalla Thermal Baths

Did you know that the thermal baths of Caracalla were the most sumptuous structure that was built in antiquity? They were coated with marble and decorated with works of art. Later, they were surpassed in extension by the Baths of Diocleciano, that in spite of their size they failed to equal its splendor.

Did you know that some of the huge tubs or marble bathtubs that were found in the hot springs were taken to the center of the city to become fountains? One of them is currently in Piazza Farnese in Rome. In the same way, the sculptures were transferred, one of the most famous, the Toro Farmesio group that nowadays is in the Archaeological Museum of Naples.

Did you know that the Caracalla thermal baths were a rectangular building with an extension of about 15 hectares? Access to the main building was through 4 large arches, and its perimeter surrounded by a large wall inside which were the gardens and the outbuildings of the baths in the center.

Why visit the Caracalla Thermal Baths?

Because considering their date of construction, they constitute a wonderful architectural example also, they had a very effective water supply system as well as heating and drainage. The large wood-burning stoves served to heat not only the water but also the floor and walls of the baths.

How to visit the Caracalla Thermal Baths?

A short distance from the thermal baths of Caracalla we find Circus Maximus, the largest building created for the performance of antiquity shows, in addition to being one of the greatest of all time. In this same area is the Palatine that is the oldest archaeological site of the city an important part of Imperial Rome.

Take advantage of your tour of Rome and visit the Catacombs which are underground galleries that were used for several centuries as a burial place. Another attraction of Rome that you can also visit is the Ara Pacis, a memorial erected between 13 and 9 BC to celebrate peace in the Mediterranean after the victorious battles of Emperor Augustus in Hispania and Gaul. It is difficult to speak of Rome in a few words, and it is difficult to visit it all in a few days, despite this, the Capital of Italy is one of the most beautiful and unavoidable destinations in the world.

Thermae of Caracalla - closed on Monday afternoon, open from 9.00 am. 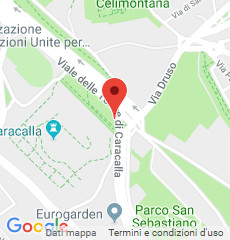