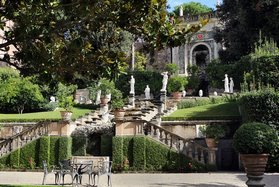 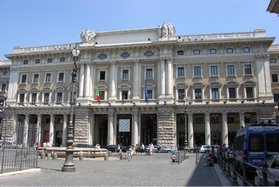 A little history of the Palazzo Colonna

The Palazzo Colonna is a block of palatial buildings in the center of the city of Rome, located at the base of the Quirinal Hill, and adjacent to the Basilica of the Holy Apostles. This majestic Palace was built on the ruins of an ancient Roman Serapeum.
It is believed that in the 12th century there was already a building and a castle in the area where the current one is located. This building belongs to the Colonna family. The main body of the building was demolished by Pope Boniface VIII and rebuilt in the 14th-century, hosting illustrious personalities such as Emperor Ludovico the Bavarian and Castruccio Castracani, and then Francesco Petrarca, a friend of the family.
According to historians, in 1400 Prince Giordano Colonna, Odo's brother and appointed Pope as Martin V, resided in the part of the Palace that is next to Via della Pilotta, where the present entrance to the Cardinal's Gallery is located, the oldest part of the building that was later extended to Piazza dei Santissimi Apostoli.

What is the Colonna Palace today?

The Palazzo Colonna is a Roman palace, which currently extends over an area where buildings and houses existed since before the year 1000, with fortresses that belonged to the counts of Tusculum, from where descended the powerful and noble Colonna family, well known in the city. The area occupied by this majestic building, including the Quirinal villa, covers an area of three hectares more or less, making it the largest noble palace in the eternal city.
Today this building houses the Colonna Gallery, the most famous palace area in Rome, a true gem of Baroque art. The Colonna Gallery was a work of Girolamo Colonna who lived in the first half of the 17th century and who held the positions of cardinal and archbishop of the Catholic Church; in 1654, he began the construction work on the Gallery, eight years before his death. The first person to participate in this project was Antonio Del Grande, who had been entrusted by Girolamo Colonna with the restructuring of the Palazzo Colonna, four years before the works on the Gallery began to create a unique architectural complex.

Curiosities about the Colonna Palace

Did you know that Via Della Pilotta is crossed by four pedestrian arches that connect the Palazzo Colonna with the Villa Colonna gardens? The two central arches were built after the arches placed at the ends of the street, and one of these arches connects directly to the Cardinal's Gallery.
Did you know that the coronation of Vittorio Emanuele I at the beginning of the 19th-century took place in the gallery of the Colonna Gallery?

Why visit the Colonna Palace?

This Roman patrician residence from the Baroque period located between Piazza Dei Santissimi Apostoli and Via Della Pilotta, preserves all the princely charm of the largest noble residence in the Italian capital.
Inside the Palace is the Colonna Gallery, made up of several rooms. The main hall or Great Room, is the one that gives it its name. The other rooms are Sala della Colonna Bellica, Sala dell'Apoteosi di Martino V and Sala dei Paesaggi. The primary purpose of the Gallery was to exalt the victory of the Christians over the Turks at the Battle of Lepanto in 1571, and it is represented in the fresco of the Sala Della Colonna Bellica where the paintings Venus Cupido and Satyr by Bronzino are kept.
Among the most important works in the Sala Grande are the masterpieces of Tintoretto, Guercino, Salviati, Rosa and Lanfranco. In the Sala Dei Paesaggi, you can admire the faithful reproduction of the Last Judgment by Michelangelo and in the Apotheosis Room of Martino V you can admire the masterpiece Il Mangiafagioli by the artist Carracci. In addition, in the Sala dell'Apoteosi you can find paintings of Onofrio Panvinio, by Tintoretto and of Il Gentiluomo, by the artist Veronese.

How can I visit the Palazzo Colonna?

The entrance to Palazzo Colonna allows you to visit the Gallery which is open to the public only once a week, on Saturday morning. Therefore, you will have over 4 hours to admire one of the most interesting artistic works in Rome, enclosed in a historical building that has a history of over 500 years. To admire this Roman beauty you can buy a ticket and visit it on your own or book a guided tour.

Located in the heart of Rome's historical center is the Palazzo Colonna. Nearby you can admire the Palazzo del Quirinale, a historical building of the city and the official residence of the King of Italy since 1870 and of the President of the Italian Republic since 1946, as well as one of the symbols of the Italian state. Within a 6 minute walk, you will reach Piazza Venezia, where the National Museum of Palazzo Venezia is located, and not far away, you can visit the Crypt Balbi, one of the four sites of the National Roman Museum. Always in this direction and going into the heart of Rome, you will reach the Pantheon and Piazza Navona. From Piazza Venezia, you can also easily reach the Roman Forum, the Colosseum, and the Domus Aurea. Many magnificent historical monuments concentrated in one city... the eternal city!

All other days, including Saturday afternoon, private visits by appointment. 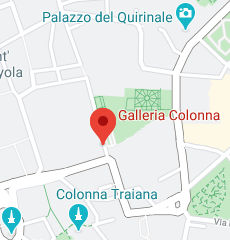