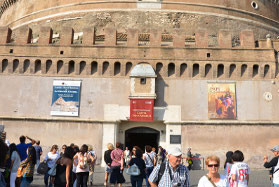 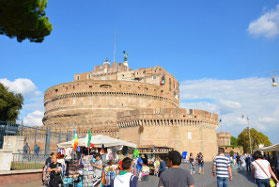 A bit of history about the Castel Sant'Angelo

The imposing Castel Sant'Angelo (Castel of the Holy Angel) is the only building that has followed the development of the city of Rome for about 2000 years, the other Roman monuments have had different destinations, some were reduced to ruins and others were used as quarries to collect materials and recycle them into new constructions.

For centuries, Castel Sant'Angelo has undergone several transformations, both from an architectural and structural point of view depending on its use: it was built in the year 123 AD as a mausoleum for e Emperor Hadrian and his family. However, Hadrian died in the year 138 AD, before the construction of the Mausoleum was completed, a year later, Antoninus Pius dedicated the tomb to him and transferred the remains of Hadrian and his wife Sabina to this fantastic monument. In 403 lost its original function and became a military fortress to defend Rome and at the beginning of the eleventh century happened to be the state prison. Years later, in the fourteenth century, after several changes of owners among the Roman noble families, Castel Sant'Angelo tied its luck to that of the popes.

In the 19th century it returned to its prison role, until 1906 when finally it became a museum, rich in charm and willing to share its historical grounding with the world.

In 1925 it was transformed into the National Museum of Castel Sant'Angelo.

A skilled tourist guide at your disposal!
Discover the museum with your private guide!
Reserved entrance, no need to queue and you can decide the starting time of your visit!

What is the Castel Sant'Angelo nowadays?

The Castle of SantAngelo is divided into five floors which can be access through a spiral ramp that allows the entrance to the chamber of ashes and the cells in which some historical people remained locked.

At the top of the castle its possible to visit some rooms that functioned as Papal residence and which were decorated with Renaissance frescoes preserved to perfection. Here you can also see the cells where the remains of Hadrian's successors, grain warehouses and a large collection of weapons are preserved.

Curiosities about the Castel Sant'Angelo

Did you know that Castel Sant 'Angelo was inspired by the exterior appearance of the mausoleum of Augustus which was built on the opposite bank of the Tiber more than a century before?

Did you know that outside Sant'Angelo Castle is Ponte Sant'Angelo? This is a pedestrian bridge over the Tiber River built by the Emperor Hadrian, but it was Bernini in the seventeenth century the one in charge of its decoration consisting of several statues of angels on both sides of the bridge.

Why visit the Castel Sant'Angelo?

Castel Sant'Angelo is a fundamental part of the history of Rome and the Vatican, is a fortress located on the right bank of the Tiber River, a short distance from the Vatican City. In some periods of the year it is possible to visit the famous "Passetto", also known as Borgo Corridor. This is an elevated and fortified passage that passes through the Vatican walls joining the Vatican Palaces with Castel Sant'Angelo.

This fortified corridor 800 meters long allowed the head of the Church to take refuge inside the Castle if necessary. The functionality of the Passetto was proven during tragic moments for the Church and for Rome. Pope Alexander VI used Castel Sant'Angelo as a refuge when Rome was invaded in 1494 by Charles VIII of France. In 1527, Pope Clement VII used this corridor to escape the bombing that started the looting of Rome.

How to visit Castel Sant'Angelo?

Castel Sant'Angelo is undoubtedly one of the most famous old buildings in Rome and to visit it you can easily buy the tickets online. Alternatively, you can request a private guide and combine this visit with the Pantheon, Campo de' Fiori or St. Peter's Square.

Castel Sant'Angelo is located on the left bank of the Tiber River, a short distance from the Vatican City, so on your visit to Rome you can combine these two fantastic attractions, a mausoleum that has survived in time and the Vatican Museums, one of the most important museums in the world.

Very close to the Vatican Museums and its wonderful Sistine Chapel, you will find the St. Peters Basilica, the great temple of Christianity that is located in Saint Peter's Square. The façade of Maderno, Michelangelo's dome and Bernini's square are unique in the world, and you will not only be impressed by its architectural beauty and magnitude, but inside the basilica you will receive an overwhelming feeling. 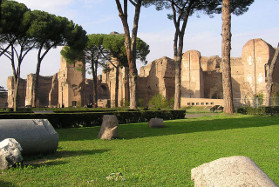 Closed on January 1st, May 1st and December 25th. 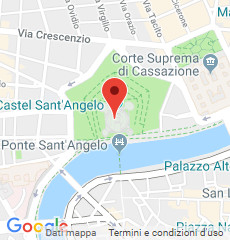