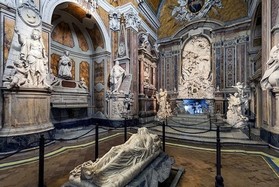 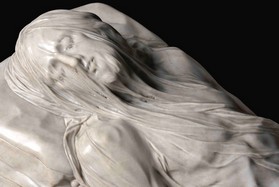 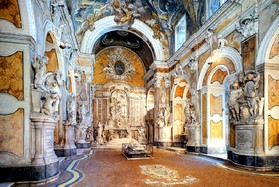 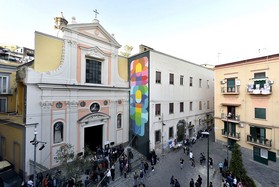 A little history of the Chapel of San Severo

The construction of the Chapel is linked to a particular story. It is said that in 1590, while a man was being taken to prison, and passing in front of the house of the Di Sangro family, he saw a wall fall and the Virgin appear behind him. The man declared himself innocent and asked the Virgin Mary to help him; in return, he would put a silver lamp with an inscription in her honour right where she had appeared. His innocence was proven; he was freed and fulfilled his promise, turning that fallen wall into a place of pilgrimage.

At the beginning of the 17th century one of the Di Sangro family members, Giovan Francesco, also made a vow to Our Lady, as he was seriously ill. Once he recovered, he decided to build a small Chapel in that place, which took the name of Santa Maria della PietÃ  (or also Pietatella). Later, his son Alessandro di Sangro, patriarch of Alexandria, transformed and enlarged the Chapel, so that it became the burial place for the members of the family. The transformation of the sacred place continued in the 18th century by Raimondo di Sangro, who renovated the Chapel as it can be seen today.

What is the Chapel of San Severo today?

The Chapel of San Severo is one of the most important museums in the city and collects many baroque-inspired artefacts. One of them is the famous Veiled Christ by Riccardo Sanmartino, considered one of the greatest masterpieces of sculpture in the world. In the museum, there are also two realistic reproductions of the human circulatory system. Also, the beautiful sculptures of the Pudicizia velata (veiled modesty) and the Disinganno (disenchantment). Finally, the floor of the chapel is a lovely labyrinth: if you follow the white marble line, you will be able to observe the museum following an allegorical path and, just as Raimondo di Sangro had thought, you will reach true wisdom.

Curiosity about the Chapel of San Severo?

Although it has been denied several times, there is a legend that continues to spin from mouth to mouth. According to this legend, the veil covering the body of Christ sculpted by Giuseppe Sanmartino is made of real fabric. It would have been possible thanks to the alchemical skills of Raimondo di Sangro, who would have "marbled" the veil through a chemical process. Many scholars have denied this legend and explained it with the inability of many to believe that Sanmartino could have carved such a perfect veil.

Another story always concerns the mysterious figure of Raimondo and the two Anatomical Machines. Legend has it that the heir of Di Sangro's house had two of his servants kidnapped to inject them with an alchemical compound that would have solidified the blood and veins. In reality, the two bodies are not the product of a story of terror, but the meticulous work of doctor Giuseppe Salerno from Palermo who, thanks to an iron wire, silk and wax, has recreated the dense network of the circulatory system.

Why visit the Chapel of San Severo?

The Chapel is a jewel of Baroque art and contains some of the most important works of the time in the area of Naples. Moreover, the legends related to the strange Di Sangro family will make you look with other eyes at the statues and decorations in this deconsecrated church. If you are a lover of art and mystery, you can't miss this building, if only for its location, since it is located in the centre, in the middle of the oldest alleys of Naples. Finally, it is worth visiting this Chapel to admire the beautiful Veiled Christ, a masterpiece of 18th-century sculpture.

How can I visit the Chapel of San Severo?

To admire this baroque wonder, buy the skip the line ticket at the Chapel of San Severo in combination with the Audio Guide of the city of Naples, a picturesque destination capable of awakening passions and making you fall in love with it.

If you are in Naples, you will be spoiled for the many choices! From guided tours that will make you discover the entire city to those dedicated to the ruins of Pompeii. You can get to know and admire the Neapolitan city in all its splendour.

If art is your passion, then you can not miss a visit to the Archaeological Museum, one of the most important national and worldwide in terms of the history of the Roman era.

In the town of Capodimonte, instead, there is a beautiful museum, housed in the homonymous palace, where you can admire paintings by Titian, Parmigianino, Raphael and many others. Exciting contemporary art, in which you can find the Vesuvius by Andy Warhol.

Finally, on the Vomero hill, you can visit the beautiful Certosa di San Martino, one of the most impressive religious buildings in the city and one of the most significant symbols of architecture and baroque art. 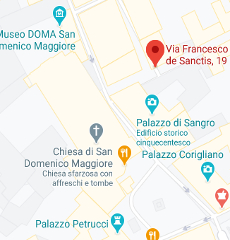