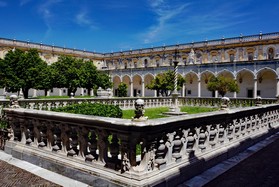 A bit of history of the Certosa di San Martino (Charterhouse of St. Martin)

It was built in 1325 at the request of Charles of Anjou. From the very beginning the former monastery underwent significant changes, which transformed it century after century until it became the monumental complex that you can admire today on top of the Vomero hill. The structure owes its shape to five prominent architects: the firsts were Tino di Camaino and Attanasio Primario, who followed the architectural canons of the Carthusian Order, a favourite of the Angevin family and the seat of the structure since 1338. This first building was completely renovated, almost wholly erasing its Gothic origins.

At the end of the 16th century, Giovanni Antonio Dosio gave the structure an exquisite Renaissance style which, however, was modified in the 17th century by Cosimo Fanzago, who transformed the Certosa into a Baroque jewel and in the 18th century Nicola Tagliacozzi gave it a touch of Rococo. At the end of the 18th century and the middle of the following century, the Carthusian monks were expelled and welcomed back several times until the definitive expulsion in 1866, thanks to the fact that the structure was declared a monumental property of the newborn Italian State. In the same year, a National Museum was annexed to the monastery, which today can be visited inside the religious complex.

What is the Certosa di San Martino today?

It no longer houses the Carthusian order, but the structure maintains an ancient and religious aura. Inside you can admire the beautiful main church, a small jewel of architecture and painting of the 17th and 18th centuries. The church is equipped with two cloisters: the large one follows the 14th-century structure and overlooks the cells that were of the Carthusian monks; here you can also find the cemetery with a very special railing of balustrade adorned with bones and skulls! The Cloister of the Procurators, instead, has a well in the centre and on the walls epigraphs, sculptures and coats of arms. Part of the monumental complex is also a National Museum, whose works tell the history of the Charterhouse and the city of Naples. Among the many, a sculpture by Bernini, works by Artemisia Gentileschi, Andrea Vaccaro and the so-called Posillipo school. Inside the museum, you can also admire the ancient Pharmacy (or Spezieria), a section dedicated to nativity scenes (ancient Neapolitan tradition) and a room where three ancient sundials are kept.

Did you know that under the monastery there are some beautiful underground rooms? These, built in Gothic style, are the most vivid testimony of the origins of the monastery, also Gothic is its initial structure and built over the foundations dug into the hill of Vomero, which probably belonged to the ancient Castle of Belforte. High ogival arches, sequences of columns, long corridors and openings that preserve statues and epigraphs are the main features that will make you love these undergrounds.

This charming space houses more than 150 works dating back to the period between the 13th and 17th centuries. One of them is the beautiful St. Francis sculpted by Giuseppe Sanmartino, the same sculptor who gave humankind the splendid Veiled Christ preserved in the Chapel of San Severo in Naples. From the undergrounds to the open air: part of the park around the monumental complex is the Garden of Women. Did you know that women could not access the monastery? However, a separate chapel with an adjacent garden was dedicated to them. After the ruin resulting from the continuous interventions, this space has been restored and is now admirable in all its splendour. To the already existing plants have been added others, which make this garden a small corner of peace and beauty.

Symbol of the Catholic religion and baroque art, the Charterhouse of San Martino is a fundamental step to get to know the true nature of Neapolitan culture. Apart from the marvellous architecture of the monumental complex, the churches, the gardens, and the works preserved in the Museum are an unmissable attraction.

Furthermore, its privileged position will allow you to enjoy an impressive view of the Gulf of Naples, thanks to the elevated position of the hill of Vomero and the careful construction of the structure, which along the route presents multiple views of the city and the beautiful sea that bathes it.

How can I visit the Certosa di San Martino?

In order to visit the beautiful religious complex, you can buy the cumulative entrance ticket that includes the Monastery and the Museum of San Martino in combination with the Audio Guide of the city of Naples, a city with character that surprises and fascinates.

Suppose you don't have enough of the combination of art, religion and baroque art. In that case, you absolutely must go and visit the magnificent Chapel of San Severo, which will captivate you with its mysterious atmosphere. And don't forget to take some time to admire the famous Veiled Christ of Sanmartino.

More art thanks to the magnificent works of the Archaeological Museum, one of the most beautiful and prestigious in Europe. Here you can see the famous horse head of Raphael and the famous Secret Cabinet, a room dedicated to eroticism in the culture of the ancient Romans.

Finally, if you want to know the Neapolitan culture live, then you have to venture on a tour of Naples, which will open before your eyes to reveal all its singular beauty. And, why not go beyond the boundaries of the city and get to Pompeii and Herculaneum, two of the most famous archaeological sites in the world, recovered over the years from the ashes of Vesuvius that had relentlessly destroyed them. 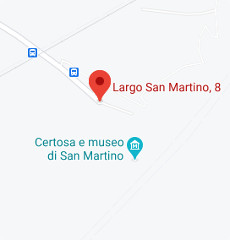